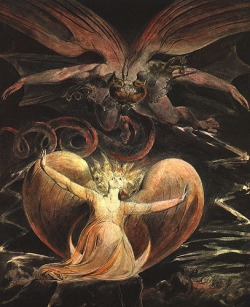 God's first creations were angels. Of all his/her angelic creations, Lucifer was the most beautiful and splendorous of all. Then, God, already having started a new form of creation on a different plane of existance or realm, decided to bring into existance the essence of his/her very love. The ALPHA ANGELS were created...angels of pure love;strength,beauty,passion, purity,temperance,benevolence,and determination. Lucifer felt extreme jealousy because these new angels were more splendorous than him. So, while God was away creating our universe, he bagan tossing them, one by one, over Heavens edge...into our realm. The first angel, Imaiel, who was nothing but a baby, was turned into a hideous beast in our realm. Lucifer encased the baby angel in a creature that had the head and tail of a lion, the horns and body of an ox, the face and voice of a human, and the wings and talons of an eagle. He also covered her body with thousands of eyes and then tossed her out to the very edges of our universe...completely alone.
The second angel, Ishtabiel, was the oldest of the seven. When he pushed her over the edge, she sprouted wings in order to fly back up to Heaven, but she didn't quite make it. Her divine essence was trapped within a mortal body, which crashed on a planet populated by God's newest creation...man. The planet's name was Seraphia and she became the mother of the Seraphian race (human's with wings).
The third angel, Azarien, was extremely beautiful and Lucifer desired her. He encased her divine essence in a flesh and blood immortal body and tried to seduce her. When she refused him, he became enraged. The first rape was commited in Heaven, then he tossed her over the edge as well, and cursed her to forever be a slave to sex by turning her into a succubus and isolating her in a realm of spirits.
The last four angels of love, the males, saw when Azarien fell over the edge. They confronted Lucifer and he pretended that it had all been a terrible accident. Lucifer tossed a golden rope to the falling angel and began to pull her back up. The other angels of love also grabbed the rope and proceeded to help haul their sister back. Lucifer pretended to go and tether the rope to a column, circled around behind the last four angels of love and tossed them over as well. These last four were not encased in a physical body, so as they fell and crashed into one another, they converged and became one, trapped within the body of their sister Azarien, the succubus.
God was furious and sent Lucifer to find and bring back his ALPHA ANGELS, but all Lucifer did was wreak havoc in our realm, tempting Eve, ruining god's other creations-like putting a stinger on God's cute fuzzy bee,turning his most beautiful wild beasts into carnivorous predators and creating a few things of his own, like mosquitos,flies,rats and devils.
When Lucifer began stirring up dissent amongst God's angels, God, heartbroken, realized he/she needed to lock away his/her beautiful unruly child and his brothers and sisters before they destroyed all of his/her creations. Then he/she created special souls to help find his/her lost ALPHA ANGELS and bring them back to Heaven.
Lucifer still sent his minions to ruin God's efforts. His greatest satisfaction was knowing that someday one of God's very own ALPHA ANGELS would inadvertantly release him so that once again he would rise to power, destroy our universe, and rage war in Heaven. He would have God's undivided love and attention once more, even if he needed to destroy every angel in existance.